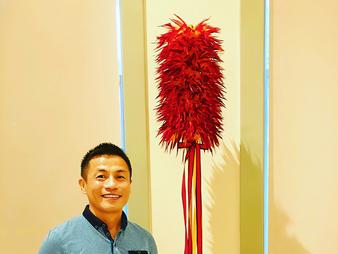 " I always believe that people can see, and feel what is the thought behind the artworks. What make my feather artworks different than others is because there’s skill passing and culture crossing from two different ethnic, there’s love, encouragement and home for a stranger like me to settle in, and there’s respect of this land and culture. When you open your eyes and mind to experience different cultures; as long as you have your heart in it, people will see and feel the beauty of you."

Boris Kekaiuluikahikina Huang is proud to be an apprentice of the late and highly renowned Hawaiian Feather Lei Master, Aunty Mary Lou Kekuewa.

Boris creates original lei hulu patterns using different colored feathers, (both dyed and natural) from many types of bird (such as goose, pheasant, duck and peacock). His styles range from traditional to contemporary designs.

It is Boris’ endeavor to bestow upon the viewer the ability to see and feel the thought and emotion which inspire the artworks. It’s very important to note that his feather artworks differ from others in that the skill he has so highly refined originates in the very traditional Hawaiian techniques. But is also inspired and influenced by his own native Taiwanese heritage. Every choice of color and placement of the materials has deep symbology and significance…

Boris has deep gratitude for the opportunity to share with you his skills in this ancient Hawaiian tradition of lei hulu… He does so with the utmost Love and respect for his kumu, this land and it’s traditions and culture.